In May, we traveled to Croatia. Exploring the Dalmatian Coast along the Adriatic Sea, we visited the city of Split, the islands of Hvar and Korcula, and Dubrovnik’s Old Town. 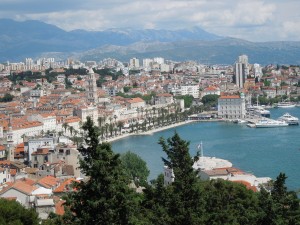 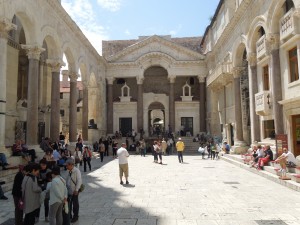 We stayed in sobes, the U.S. equivalent of bed and breakfasts.  We had wonderful hosts at each. They gave us insight into today’s Croatia and the tourism industry they depend heavily on for their livelihood. To get to each destination, we relied on the local buses and ferries. 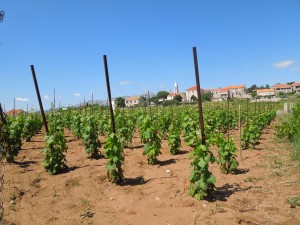 The Mediterranean climate was soothing with the hot sun, turquoise water, and lush vegetation. It claimed fresh fruit, vegetables, and local wines. We were charmed by the beauty of this region with its limestone mountains and pebbled beaches.

In July and August, the Dalmatian coast is overrun with European tourists. In May, though, the tourists are trickling in, in smaller numbers – many via cruise ships.

We visited three ancient, walled cities: Split (4th century Diocletian’s Palace) and the Old Towns of Korcula and Dubrovnik. We explored their narrow pedestrian streets looking for a Roman temple or a 15th century cathedral and caught glimpses of the Adriatic whenever possible. 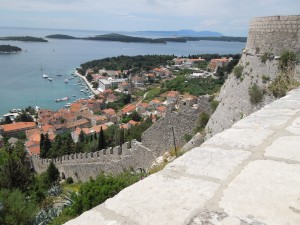 Along the way we learned about Croatia’s early history with the different foreign powers who controlled this land: the Illyrians, Ottomans, Venetians, and Hapsburgs. 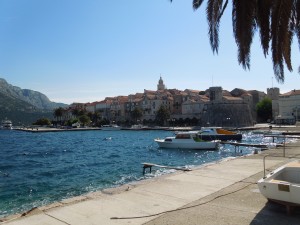 The local food had influences from Italy and Turkey. Local wines, cheeses, fresh cherries, figs, almonds were bountiful.  We enjoyed delicacies only found in Croatia like cukarin cookies and Grk wine on Korcula. 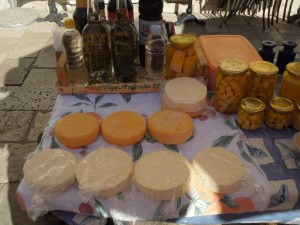 In Split, we listened to a six-member male a cappella group sing (klapa singers) in the original entry vestibule of Diocletian’s Palace.  The vestibule was round with a domed ceiling. The acoustics were outstanding.  Interestingly, while in Korcula town’s old city we would run into an all-female a cappella group practicing in a similar setting.

The “Pearl of the Adriatic,” Old Town Dubrovnik, waited for us at the end of our trip. With its mighty medieval walls surrounding Old Town; narrow, cobbled streets; and, small squares within, it was just the spot to spend several days exploring and relaxing. 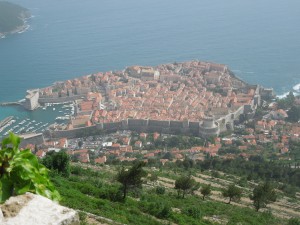 Dubrovnik is ever so charming as a pedestrian-only town. We walked the mile plus of perimeter walls and rewarded ourselves for our efforts with a sunset drink at the Buza bar – a bar perched on the cliff between the perimeter wall and the sea. Breathtaking!

We found Venetian “palaces” to visit as well as a few museums including one on Dubrovnik’s history, its people and culture; a 12th century cathedral, an Orthodox church, and the main promenade, Stradun, to stroll. 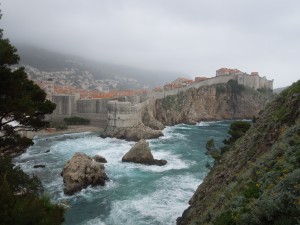 One morning began with mist, fog and wind – a dramatic backdrop for our visit to St Lawrence Fortress. The fortress stood across a narrow cove from the Old Town’s perimeter walls. From the fortress, the views extended to Mount Srd (pronounced “surge”). Mt Srd would serve as a strategic defensive post for Dubrovnik starting in the early 1800’s when Napoleon built Fort Imperial at the summit to the Siege of Dubrovnik in 1991-92.

The Dalmatian Coast fascinated us and spoiled us. I could not have imagined how beautiful a region it would turn out to be. There’s nothing better than to reach the destination you’ve planned on visiting for months and be completely awed.

(For information on planning a trip to Croatia, consult Rick Steves’ book, Croatia & Slovenia. You may also want to refer to his website with its Traveler’s Helpline.)

This entry was posted in Europe. Bookmark the permalink.