A recent spring trip to Paris had me reveling in visiting the
old “haunts” that I enjoyed years ago while living there. A walk through Montmartre,
though, was particularly charming with its history and views of Paris. It had a few
surprises for me too. 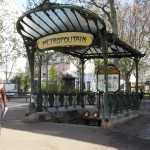 The Place des Abbesses is a small square whose focal point
is the Art Nouveau metro station entrance designed by Hector Guimard. Guimard designed these metro entrances for the opening of the Paris metro system in 1900 that coincided with the Exposition Universelle (World’s Fair).

The artist mecca that was Montmartre in the late 19th
and early 20th centuries can still be found. In Place Emile Goudeau,
the Bateau-Lavoir was the former residence for new artists like Picasso, Braque,
and Juan Gris as well as a “think tank” for writers, art dealers, and other artists. 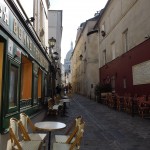 A bit further up the hill (yes, Montmartre is the highest
point in Paris), an intersection with several tiny roads (rues Norvins, Saint-Rustique, and des Saules) represents what Montmartre would have looked like circa 1860-1900.This
crossroads was frequented by the artists Pissarro, Sisley, Cézanne,
Toulouse-Lautrec, Renoir, and Monet among others. The artist Utrillo captured the character of this era in many of his paintings.

The Place du Tertre is charming albeit touristy. Today’s
artists set up their easels early in the morning and paint caricatures and sell
watercolors and paintings of Paris sites. A short walk away is the Eglise Saint
Pierre-de-Montmartre. It is the only surviving building of the abbey of Montmartre.
It is also the oldest church in Paris dating back to 1134.

Today, of course, the church that most associate with Montmartre 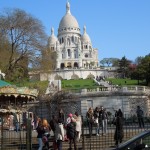 is the Sacré-Coeur Basilica built during the turn of the 20th
century. With its location on the summit of Montmartre, it not only commands attention, it delivers commanding views over Paris.

I did mention Montmartre’s surprises earlier. To
reach them, you must descend the back, western side of the Sacré-Coeur. 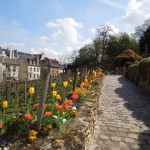 On rue
des Saules, the private Clos du Montmartre Vineyard lies with over 2,000 vines.
The grapes are harvested each October during Montmartre’s harvest festival.

Continuing west, a windmill can be found on rue Lepic. Dating back to 1622, the Moulin de la Galette has a long history that 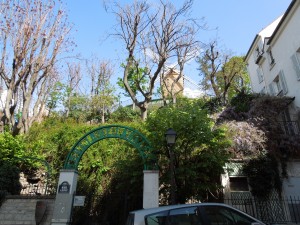 includes Paris sieges, a dance hall business, and relocation to its present location in 1924. The mill was restored in the 1970’s but no longer runs. 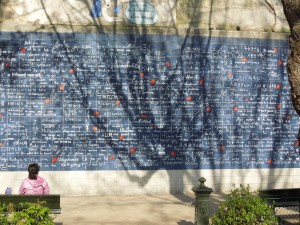 Finally, heading back to the Places Abbesses to the Square Jean Richtus, is the I Love You wall. Sitting in the square you can rest and read the words, I love you, in over 300 languages – a nice ending to this nostalgic tour.

This entry was posted in Europe and tagged Montmartre, Paris. Bookmark the permalink.