The High Line – A Pedestrian Delight Above Chelsea

Strolling the High Line in Manhattan’s Chelsea neighborhood takes you away from the busy streets below to an elevated garden oasis. Built in the 1930’s to provide safer freight transportation in what was a crowded industrial area, the High Line carried trains with meat, produce, dairy, and other goods directly into factories and warehouses until the last freight in 1980.  Later that decade, sights were set to demolish the entire High Line structure until community activitists stepped in with a vision to preserve the space as public open space. ﻿ 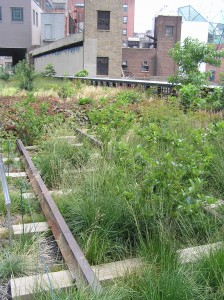 Remains of railroad tracks amidst the flowers on the High Line

Since June 2009, area residents and visitors have enjoyed walking the High Line. The hot July day of my walk, I encountered drinking fountains with music, meandering paths lined with gardens and subtle water features, and fun places to sit. Vendors selling shaved ice and ice cream were popular. Views included the Hudson River to the west and the Empire State building to the east.

In June of this year, the second segment of the High Line opened between West 20th and West 30th streets. One of the highlights is the 23rd Street lawn offering an area for sunbathing and picnicking. A third segment, completing the mile and a half park, is scheduled for construction. Learn more about the High Line: www.thehighline.org

This entry was posted in USA, USA, Northeast. Bookmark the permalink.